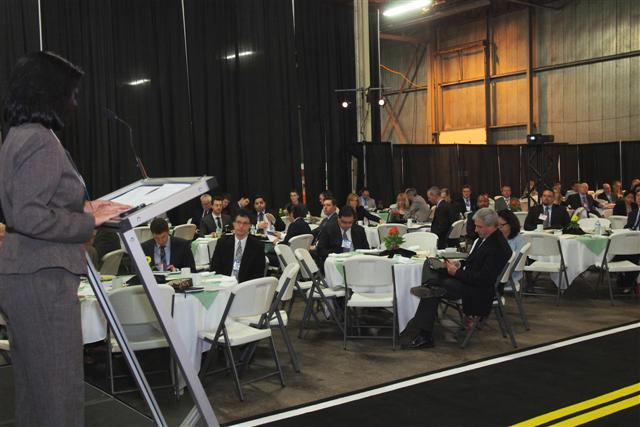 The Hamilton Chamber of Commerce today announced plans for its seventh annual Economic Summit, our city’s premier leadership initiative focused on the future of the local economy in a global context. The event will take place at the Scottish Rite in downtown Hamilton on Thursday June 5 from 1 pm to 5 pm followed by a leadership reception.

“The summit is a formal gathering of Hamilton’s leadership from all sectors of our economy,” said Chamber president and CEO Keanin Loomis. “It’s an opportunity to take stock of our economic progress and spark new actions to advance the goal of Hamilton becoming Canada’s top midsize city measured by talent, investment and quality of life.”

HES 2014 will introduce a new half day, high speed format designed to inform and inspire delegates. It will build on the Ambitious City theme which has become a community-wide rallying cry to assert Hamilton’s role on the regional stage and beyond.

The program — now in the final stages of development — will spotlight a selection of new and emerging economic breakthroughs redefining jobs, prosperity and life in Hamilton. These initiatives arise from Hamilton’s competitive strengths in advanced manufacturing, creative industries, education, life sciences and transportation.

“We’ve been working over time as a community to capitalize on these significant strengths,” explained Loomis. “HES 2014 will show how these advantages are translating into community wealth and highlight related investment opportunities tied to future growth.”

The program will also provide updates on Chamber-led economic actions, including its taskforces, committee work, and summit-inspired initiatives, such as Hamilton Hive and The Renew Hamilton Project.

Content will be presented by local leaders in concise talks supported by dynamic images, infographics and videos. Emphasis will be placed on spin-off benefits that move Hamilton forward, together.

The summit content and experience will confirm the return of Hamilton: The Ambitious City.

Invitations have been extended to senior leaders in the public, private and not for profit sectors. Attention has also been placed on attracting key regional and national leaders. Said Loomis: “We’re eager to share our advances and investment story with the world.”  Organizers expect approximately 300 delegates.